Hong Kong is home to many attractions and places of interests. Of these, the following are among the most interesting places to visit while on a vacation with kids. 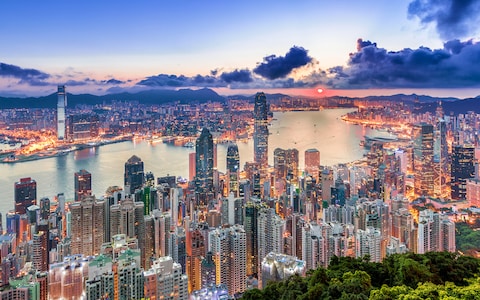 It is no secret that the skyline of Hong Kong, with its grand towers and mighty skyscrapers, is one of the most spectacular skylines in the Southeast Asian region. As such, it only makes that panoramic views of the Hong Kong skyline are regarded as being truly breathtaking. It is for this reason that ferry rides along Hong Kong Island and Kowloon have become extremely popular amongst tourists. The Star Ferry service began as early as 1888 and was first solely operated for the purpose of transporting locals from Hong Kong Island to Kowloon. Over the years, as the skyline of Hong Kong began to rise, Star Ferry began to offer scenic tours, and now it is regarded as one of the most magnificent experiences Hong Kong has to offer. The Single Ride Night Round Trip by Star Ferry is the most famous, as you will embark of a specially built 1920’s ‘Shining Star; ferry and be whisked away gently along the waters as you are treated to the awe-inspiring sight of the Hong Kong skyline at night. With six different types of cruises and pick up points at Star Ferry Pier, Wan Chai Ferry Pier and Central Pier 7, the Star Ferry tours are easy to reach, and many Hong Kong luxury hotels, the likes of The Murray Hong Kong, actively promote Star Ferry tours to its patrons.

The Peak, the highest point of Hong Kong Island, is one of the most beautiful and scenic areas in Hong Kong. Naturally, The Peak is the subject of many tours that are aimed at discovering and exploring the beauty and highlights of The Peak and its surrounding areas. One of the best tours of the peak, however, is The Peak Circle Walk. As its name suggests, The Peak Circle Walk traverses around The Peak, giving those on the tour a virtual 360o tour of the highest point of Hong Kong Island. The tour starts from Lugard Road, an old road that goes along the edge of the Peak. It was built in 1913-1914 and offers many spots from which you will be treated to stunning views of the Victoria Harbor. The best viewing area on Lugard Road, known as “Lugard Road Lookout” offers the best view of the harbour. As you continue walking you will be able to see the breathtaking beauty of the Hong Kong Island as well as panoramic views of the oceans around it. Next, you will come to Harlech Road, which continues to go around The Peak. Along this road as well you will be treated to amazing views and one particular stretch which offered complete shade by luscious canopies of trees. The highlight of Harlech Road is the awe-inspiring view of the waterfall at the foot of Mount Austin Playground. The whole tour spans over a distance of 3.5km and generally takes about an hour to complete.

Located approximately 15km from Wan Chai, in the city of Sha Tin, is the Ten Thousand Buddhas Monastery. Built-in 1957 by Rev. Yuet Kai, the Ten Thousand Buddhas Monastery is one of Hong Kong’s most famous Buddhist monasteries. Rev. Yuet Kai, who was in possession of a large estate donated to the Rev. Yet Kai’s cause by a devotee, decided to build a monastery of the land. The reason for this monastery being so popular, why it has its name, is because there are over 13,000 miniature Buddha statues within the monastery. Thus, in addition to the monastery being home to beautiful structures such as a nine-storey red & gold Pagoda and stunning halls of worship, the temple is adorned with hundreds upon hundreds of Buddha statues, making the monastery not only a place of Buddhist reverence and worship, but also a tourist attraction in its own right.

Le Spa by Jan is one of the most reputed spas here. Located within the Siu Ying Commercial Building, this award-winning spa was established only in 2014, but in the short span of its existence, it has managed to among the ranks of the best spas in Hong Kong. Offering a range of rituals, body scrubs, massage therapies, skin rejuvenating treatments, body slimming treatments, as well as facial treatment, none of which are intrusive nor medical, Le Spa by Jan combines the use of great products, highly qualified staff and intimate customer relations to give you a relaxing, revitalizing and rejuvenating spa experience. Some of their signature treatments include the Utopia Ritual, the Thalgo Perfect Sculpt Body Scrub, and the Silicium Super-Lift Facial, all of which are around the HKD 900-1200. Garnering top reviews from their customers on a daily basis, Le Spa by Jen truly is a spa in its own league and one that is well worth visiting if you are stressed out and want some pampering.